People are already very excited for the upcoming Microsoft Surface Pro 5. Reports have it that it will be out as early as  April along with Windows 10. This is not confirmed and is purely speculation with other rumours reporting October release dates. We here at eStorm are looking forward to Microsoft officially advising on it’s release (whenever it happens). Stay tuned for more news and updates.

To wet the appetite, here are the unconfirmed specs of the highly anticipated device. Microsoft Surface Pro 5 is expected to feature the Intel Kaby Lake Core i7 processor. The new chip will improve the device’s overall performance and save battery life as well. It will also be equipped with 16GB RAM and 512 GB internal storage. However, this is still unconfirmed as some sources claim that the device will have Qualcomm Snapdragon 365 processor.

Microsoft Surface Pro 5 will come with a rechargeable Surface Pen, new keyboard base and a lightweight aluminum body. Reports are rife that it will also have a 12.3-inch ultra HD/4K display, USB Type-C support and a robust battery life.

ClassDojo helps teachers celebrate student moments in the classroom, and share those home with parents.

I loaded this application myself through the web browser and it was so simple to register, create a class and personalise, invite students and parents (autogenerated PDF with access codes) and to celebrate students, reward them through feedback directly,  preset skills are customisable, to suit your classroom. I see this as an enjoyable and positive way to encourage positive behaviour management and for students to receive instant feedback.

If you do a lot of notetaking, attend multiple meetings during the week, and collaborate with others on projects, then OneNote can keep that flood of info neat and tidy. All your notes—even words in pictures—are searchable inside OneNote, and they’re stored in the cloud and immediately accessible via the OneNote apps for any platform.

Capture your thoughts, discoveries, and ideas with OneNote. Take a picture of the whiteboard in a meeting with auto-cropping and photo enhancements. Add your PowerPoint presentation or PDF for school.

Organize your notes in a way that works best for you. Create, rename, search, sort, and copy pages, sections, and notebooks. Find your most recent notes quickly and pin the pages you use most. Secure your notes with a password and use touch ID to quickly access them. Share your notes with your friends and colleagues. Whether it’s a party your planning with others, or a school project you’re working on with your group. Work together in a shared notebook at the same time. Scribble your notes at a conference, write math equations in class or sketch your ideas. With a variety of pen colors and settings, you can create beautiful handwritten notes and drawings. Draw with confidence with “Convert to Shapes” mode: we’ll automatically convert hand drawn shapes into crisp, perfectly regular polygons and circles.

OneNote, when compared to other products is better as a productivity aide, with its focus on typing and hand-writing notes, audio recording and search tools, it affords smart integration with the rest of Office.

By utilising only the highest quality components, a CommBox Touchscreen has a 17 year life expectancy and does not require maintenance or replacement lamps.

Connect a Windows PC, Mac or laptop and interact immediately; no drivers or calibration required. CommBox Interactive touchscreens are truly plug & play. A Classic touchscreen comes ready to use straight out of the box, reducing installation time and costs.

Options for stands: Motorised Stand for the CommBox 55” – 103” Interactive and Display. This design can also be used as a floor mount motorised lift in areas where walls are not reinforced by removing the legs. A standard Mobile Stand to suit CommBox 55” – 103” Interactive and Display made of heavy duty powder coated stainless steel or the Tilt Trolley a robust trolley that allows you to raise and lower the screen as well as tilt into a fully at table top. The Tilt Trolley is extremely stable and designed to fit through doorways with 100mm casters for easy movement. Suitable for screens up to 75” in both Interactive and Display.

Playgrounds is genuinely a full Swift interpreter built into an iPad app. Although the demo in the Keynote focussed on some simple concepts, it’s not a toy or limited version of the language.
The app is comprised of two parts: the source view on the left and the live view on the right. The source view is where you type your program and the live view is where you see any output. At the same time, in the right margin of the editor, you can see intermediate results as they are calculated. This has been part of Swift Playgrounds on macOS for some time.

The app supports two kinds of files. The first is the Playground file that you can create using Xcode on a Mac. These files can be transferred to the iPad and run as-is inside Playgrounds on iOS.
The second kind of file is called a Playground Book. This is what you saw in the keynote. It’s much richer and supports a nested chapter and page structure that supports navigation as well as basic assessments of success inside each page. The package format is documented online.

There are also a range of things that authors can do with each page in a Playground Book to make it easier for beginning programmers to meet success. These include hiding setup code that doesn’t need to be seen by the learner, defining “editable regions” to constrain the learner to only type in certain areas and providing hint text in those editable areas.

Another feature of the app is that it freely allows import and export of Playgrounds and Books to other users via AirDrop. In my experience with beginner programming environments, being able to inspect and adapt someone else’s code is a very good way to build learners’ curiosity and confidence – as well as a bit of competitiveness!
The app also features certain other simplifying tools for entering code. There are colour pickers, image literals and other gestures that make it easier for learners to avoid syntax errors. One simple example is that you can drag out the lower brace of a conditional statement or loop to enclose other statements and everything springs into place when you let go.

The QuickType bar above the keyboard (the area where you get text suggestions) has also been adapted to give code completion suggestions that are sensitive to the context and only let you complete legal code in the language. Authors of Playground Books can also give hints to the suggestions mechanism to constrain it to only show certain symbols or only symbols from certain packages.

It’s important – and not at all obvious on first sight – to understand that Playgrounds is not in itself an authoring environment for Playground Books. When a learner works with a Playground Book, their edits to the code in the book are stored as a diff against the original content in the book. The original content is never modified, but the diffs do get transferred with the book when it’s sent to other users. The reason it’s done this way is that it facilitates resetting a page in the book to its original state if the user needs to. You can also reset the entire book.

The other thing that is not entirely obvious is that Playgrounds has full access to the entire iOS API. This means that there is effectively no limit on the complexity of Playground that you can build. You can use APIs like Core Location, WebKit, MapKit, Core Motion, Networking and Core Bluetooth. One of the demos given in the session on Playgrounds was of Playground Swift code controlling a Sphero robot over Bluetooth. 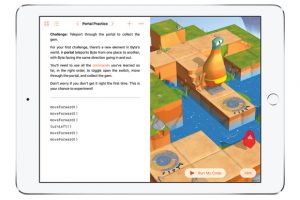 A broader question than “is the app any good?” is whether or not the Swift language itself is any good for Computer Science education.

As a teacher, you would need to know that Swift is a good language for learning to program with. One simplistic approach to promoting Swift in CS is simply to make the argument that kids love smartphones and apps are written in Swift therefore CS education should happen in Swift. I get the thinking behind that but it feels similar to other moves that some teachers make to co-opt anything that kids like and turn it into “education”. Remember Second Life? And …. dare I say it …. Minecraft In the fullness of time?

I prefer to ask which specific language features in Swift make the language a good choice for learners. When Apple were set this challenge, they gave some good points. One of the things I particularly liked was that Swift leans toward explicitness rather than implicit or inferred behaviours.

Swift also has API design guidelines focused on expressiveness and understandability rather than terseness. It’s also a relatively new language. This certainly has its drawbacks in that the language has changed substantially over the last two major revisions but there is a consistency and clarity to its approach that is sometimes missing from languages like Python.

IS THERE A DOWNSIDE?

Swift Playgrounds is a very new app on iOS. Although it’s fairly complete, there are a few things I feel that it still needs.

Firstly, I mentioned that there are ways to get the Playgrounds app to render your code by omitting and hinting certain areas. There’s currently no way to get that rendered view out of the app. This is important for teaching in two ways: firstly, it would allow students to submit work to a teacher through iTunes U. The second reason is that a teacher authoring a solution would be able to give a printout of a completed (rendered) version to a pupil who needed it for whatever reason – perhaps a pupil with learning difficulties for whom copying in a provided solution would represent a good achievement. Giving these pupils the full unrendered source would be overwhelming.

The bigger issue right now is that the authoring environment for Playground Books is Xcode on macOS. It may be difficult to find a lot of teachers who even have a Mac and are familiar with Xcode.
I have seen before that the phrase “you use a Mac for that” is a show-stopper in education. This was true for iTunes U before Course Manager came to iOS and it’s still true for iBooks Author.

I think there might, in time, be ways to create Playgrounds and Playground Books on iOS but it will be neither easy nor convenient for some time to come. This isn’t an unexpected problem but it is still a problem.
Overall, though, it’s hard to find anything seriously bad to say about Swift Playgrounds except that it’s an early, immature product right now. Despite that, it already has serious power under the hood and some impressive curriculum content. Can’t wait to see where this goes.